Elekt Labs s.r.o. develops MES (Manufacturing Execution System) for the automation and optimization of production processes. It provides sophisticated solutions to everyday problems. This includes adjusting and developing systems for planning, optimization and data collection of production in industrial processes. Elekt Labs s.r.o. is strictly focused on client needs. Its aim is to create a fast, stable, predictable, customized and user-friendly software with an acceptable price and service.

Here at Elekt Labs we are committed to learn and successful development of individuals in the technology field. We were a proud partner of the "Student Scientific Competition On the Award of the Dean of the Faculty of Science" at the Palacký University in Olomouc. The aim of this competition is to motivate students to participate actively in science, research and learning. We support all students studying in these areas and continue to do so through hiring of students and interns. We also provide free downloads of some of our programs, to contribute to learning and knowledge of technology. See the Utility section for more information. 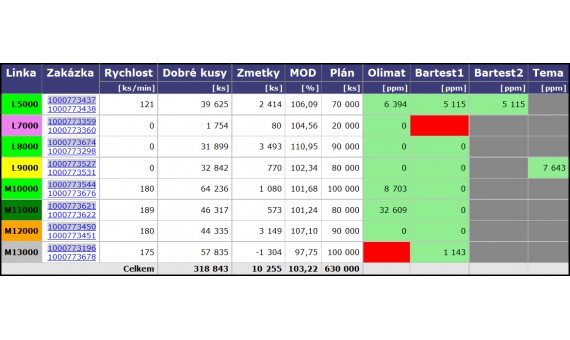 "Measuring and Statistic Application" is a production information system used for monitoring and evaluating machinery and other technological systems. This is achieved through automated data collection. The aim of the application is to constantly and quickly identify problematic areas in order to remove them. This contributes to substantial cost savings as well as improving quantity and quality of production. The principle of the application is built on a continuously updated database, and subsequent processing through optional modules or providing the data for its own processing.

2004 Establishment of the company. Programming of DB systems with DELPHI and ASP.NET. Connection of machines to the MASA monitoring system at ČZ a.s. - Division Aluminum foundry.

2005 Foundation of the developmental workplace in Velký Týnec. Automated temperature measurement of incrushes for TŘINECKÉ ŽELEZÁRNY, a.s., using the MASA system to record values was completed.

2007 Inclusive deliveries of electronic equipment. Installation of the automated system for managing, optimizing and disposal of production in Kingspan Sp. z o.o. (Poland) and Kingspan kft. (Hungary) was completed.

2008 Marked extension of the developmental team. Development of an apparatus (porosimeter) for Ball Aerocan CZ s.r.o., deployment of the production quality control module to the MASA system.

2009 Next extension of the team, development of industrial electronics with CPU ARM7.

2010 Connection of the new function,"Packer" to the MASA system for Ball Aerocan CZ s.r.o.. Development MASA II. Implementation of data collection in SICO RUBENA s.r.o.. The development of a new version of the porosity measuring apparatus.

2013 Development of the Data concentrator continues.

2015 Development and implementation of the rotation mechanism for the Keyence machine at Ball Aerocan CZ s.r.o.

Since January 2021, a new development office directly in Olomouc. We are currently recruiting here both ASP.NET Developers and Delphi Developers. For more information, please see the Careers Section